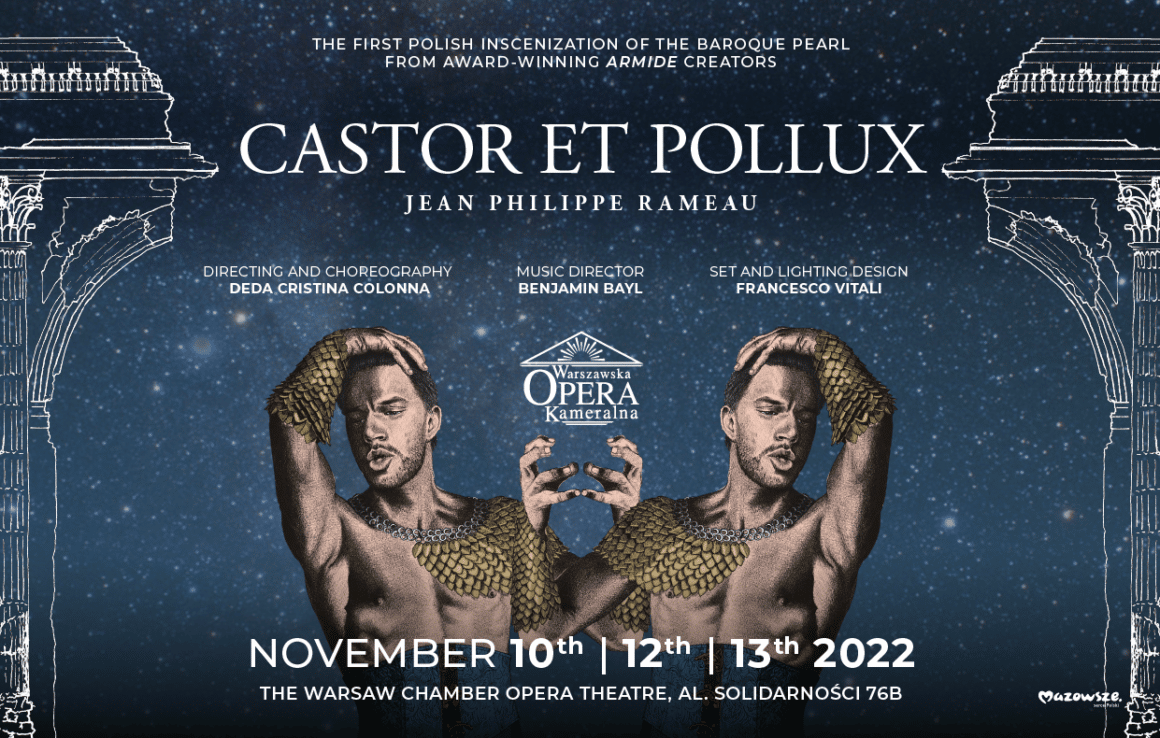 Opera is a synergy of instrumental virtuosity, singing, drama, dance, plastic arts, and in the case of Jean-Philippe Rameau’s masterpiece “Castor et Pollux”, one can also say about the synergy of antiquity, esotericism, Kabbalah and… astronomy. From the perspective of the centuries, we can safely say that we are dealing with art which, due to its multidimensional nature and universal approach to mythology as the key to the timeless presentation of human nature, forces us to reflect without losing any of its topicality. News from the 18th century and the present day.

After the premiere of the opera “Armide” has turned out to be a huge success for the Warsaw chamber musicians, the director of the Warsaw Chamber Opera Alicja Węgorzewska-Whiskerd invited the same duo of Italian producers to work on another great production. This time, Deda Cristina Colonna and Francesco Vitali staged in Warsaw Jean-Philippe Rameau’s opera “Castor et Pollux”.

My vision of staging and choreography of “Castor et Pollux” at the Warsaw Chamber Opera is to view the libretto through the esoteric astronomy, showing the story as a personal journey from one’s internal contradictions, to reaching human consciousness, and presenting nature as a harmony of contrasting forces. The characters presented in the drama will correspond to those from the Great Taro’s Lassos. I won’t tell anything more – says Deda Cristina Colonna.

Through the figures of the Dioscuri, in Roman mythology known as Castors, Deda Cristina Colonna shows in her vision human features on the basis of its natural contrast, often confronting human and divine features. Thus, there will be a space to show a boundless friendship, but also the void left by a loved one’s death, joy and its opposing pole – mourning.

Jean-Philippe Rameau presented to the world the opera “Castor et Pollux” at the Académie Royale de Musique in Paris on 24th of October in 1737. Within two months, the work was staged 21 times, and thanks to the revision made by the composer himself that was staged on 11th of January in 1754, “Castor et Pollux” was presented 254 times (from 1737 to 1785) and was considered a masterpiece of French opera.

The Warsaw vision is a kind of signum temporis, i.e. a tribute to art with full respect for tradition, including the most important one – performance, built on the foundation of historically informed interpretation with the use of an orchestra of early instruments and singers freely using techniques typical of the Baroque. On the other hand, what is interpretatively profound has been complemented with contemporary stage technologies for the 21st century, with particular emphasis on multimedia, which means that even such prosaic barriers as spaces and perspectives have been broken. It is a new voice in the interpretation of the baroque canon, on the one hand a favour to the centuries-old tradition, while boldly looking at what is here and now, and what awaits the opera around the corner. One thing is certain, it is a must for every music lover.

“Castor et Pollux” by Jean Philipp Rameau, who is considered a master of the French Baroque, at the Warsaw Chamber Opera gained the shape of an intelligent work, thanks to its references to tarot, esotericism and astrology, also universal and skilfully led a contemporary dialogue with the past. The set design (Francesco Vitali) is minimalistic, but thanks to the use of multimedia and the phenomenal use of lighting, it gains clarity that deepens the director’s interpretive clues (Deda Cristina Colonna). Simplicity prevails in building stage situations, from the variety of dances, ballet arrangements, arias and scenes with the participation of the choir, but the suggestive stage movement (especially in the case of a choir it will be a very important gesture, composed naturally, delicately and without pretended emphasis) acts on all our senses and the emotional demand of the viewer that appears during perception. The static nature of the action is ruled by an innovative approach to the ancient heroes, which tries to depart from purely baroque conventions and breathe new life into the form. Colonna and Vitali do not try to recreate the presented world, dominated by myths and references to antiquity, in a fairy-tale way, but when looking for a metaphor, they go towards creating their own, strong world marked by intimacy, in which each image will be combined with its nobility with baroque music and the one that which in its content is still important and eternally valid.

In terms of vocals, the performance can be considered very stylish and noble. Almost all artists have been gifted with interesting voices, and the secrets of the old techniques are undoubtedly no strangers to them. The most convincing was Kieran White in the role of Castor, his voice had the brightness appropriate for French music, but also the lightness, which is the basis for the performance of this type of repertoire. Only Kamil Zdebel was slightly behind him as Pollux; both singers, thanks to their resignation from the exaltation that might evoke an unnecessary impression, achieve a high degree of stage truth, sometimes even distance, which is not easy to achieve in this type of libretto. On their faces, every surprise, fear, happiness or emotion caused by the unexpected turn of events was discreet, but not devoid of internal tension. Aleksander Rewiński handled with the sounds in the upper register a bit worst, but fortunately the parts he performed (Un Spartiate, Un Athlète, Mercure) were not the most important in this performance. Of the ladies, I liked most Ingrid Gapova (Cléone, Une suivante d’Hébé, Une Ombre Heureuse), I found Télaïre interpreted by Tosca Rousseau too majestic and dignified, while Anna Werecka suitably hit the tones of envious, still intriguing Phoebé.

The MACV Ancient Instruments Ensemble of Warsaw Chamber Opera, led by the Australian conductor Benjamin Bayl, was characterized by freshness in articulating an expressive and lively musical line, properly reflecting the temperature and richness of moods contained in the Rameau score. The harmonious sound combined with the vocal interpretations of the soloists was also impressive. Bayl excellently moved from sequences of crazy storms or sequences of great dramatic power, not only emotional, to heavenly moments bringing gentle relief or peace of love confessions, including brotherly ones.

The direction and choreography of Deda Cristina Colonna and the musical direction of Benjamin Bayl are a guarantee of success. Alicja Węgorzewska anticipated it, inviting the creators to the stage of the Warsaw Chamber Opera. After the brilliant “Armide”, the time has come for the French tale “Castor et Pollux” by Jean Phillippe Rameau. It is a charming spectacle showing that heaven is where love is, and Cupid’s arrows do not lose their power even after death.

It is an opera not only of singing and music, but also of movement. Excellent choreography harmonizes wonderfully with the plot and enriches it, a daring choir hypnotizes, consciously created scenography leads us into a world where hellfire declares war on the thunder of Jupiter, and relaxed women in heaven tempt us. Castor et Pollux is a story set in the afterlife, since Cupid’s strength makes him haunt with arrows even after death…

The performance delights with its splendour and musical baroque played on period instruments.