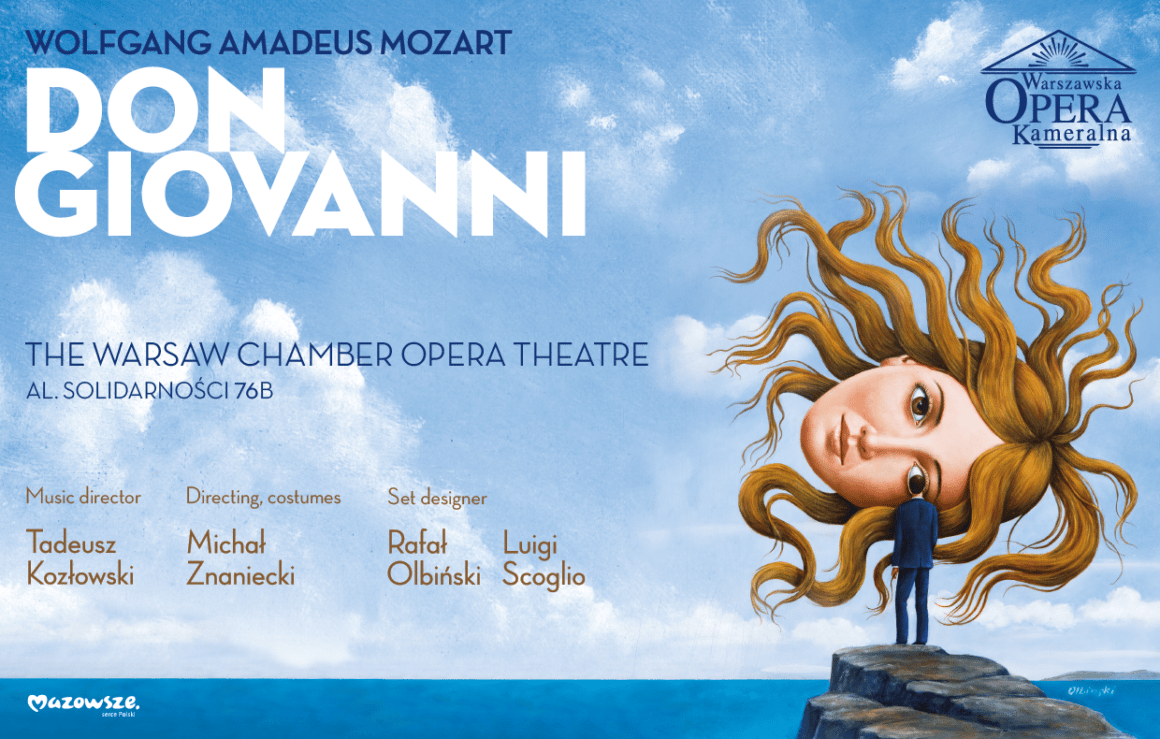 CAUTION! A performance for viewers over 16 years old. During the performance, short-term strobe lights will be used twice.

We invite our viewers to watch the opera “Don Giovanni” in a new staging by Michał Znaniecki. Whenever this masterpiece by Wolfgang Amadeus Mozart appears in a new version on an opera stage, it attracts the attention of the entire musical world.

Whether any of the opera premieres of Wolfgang Amadeus Mozart has been crowned with such wonderful reviews as it was after the staging of the opera “Don Giovanni”? What is it about this opera, that still awakens the imagination of musicologists as an opera that was much ahead of its time?

It was in Prague, where the Salzburg Master was to give the world an opera telling the story of the greatest seducer, as a result of excellent reviews after “The Marriage of Figaro”, but the way the people of Prague received “Don Giovanni” exceeded all expectations. Vienna, full of malcontents, often waiting for Mozart to stumble, had to deal with the reviews that flowed abundantly from Prague this time.

In 1787, “Wiener Zeitung” in its 91st edition, wrote about the great success of the work, staged with the cooperation of an Italian troupe operating in Prague under the leadership of the tenor and manager, Domenico Guardasoni. Mozart himself, encouraged with great success, wrote to his friend Gottfried von Jacquin: On the 29th of October, my opera hit the stage and became indescribably successful. I hope to have it staged in Vienna, although they want me to write another opera for them here, despite the tempting offer, I have to refuse.

The purely literary aspect of the work has also undisputedly decided about its ultimate success. The author of the libretto, Lorenzo Da Ponte, referring directly to Molière’s work, created a masterpiece confirming the rightful opinion of the greatest librettist of his time. It is significant that the opera, regarded today as an absolute masterpiece, and one of the greatest achievements of the human mind, effectively divided the critics of the May premiere in Vienna (7th May 1788). Some interpreted it as an opera buffa nomen est omen in accordance with the intentions of Mozart himself, the point is that both the subject of the drama and the way the plot and characters were presented in it, made them eligible for much more serious genre of dramma giocosa. And it was the way in which the opera was interpreted that decided about the polemics. It was stopped by Joseph Haydn himself, as Johann Schink writes in Dramutrgiche Monate 1790, deeming any discussion pointless in the face of the genius of the greatest composer of all time, Wolfgang Amadeus Mozart. Nomen est omen, the same influential Viennese critic (Schink), although hammers the libretto, he also praises Mozart’s music.

In this opinion, Chronik v. Berlin went further, already then describing “Don Giovanni” as the most outstanding opera work ever heard by a man, being significantly ahead of its time. To what extent, it is best described by Johann Wolfgang Goethe’s in his letter to Friedrich Schiller of December 1797, in which the poet emphasizes the uniqueness of the work with its certain artistic hermetic nature, which, due to its artistry, is reserved for the few.

Carl Spazier, one of the most influential critics of Mozart’s days (he published in Musikalisches Wochenblatt) went the farthest, writing that one aria from “Don Giovanni” meant more than all the works of Giovanni Paisiello.

The artistry mentioned by Goethe, deviating from the desire to flatter cheap tastes, did not interfere with the success counted by the stagings of the work. According to Mozart’s biographer Otto Jahn, the opera has been staged 531 times until 1863, in Prague – 476, and in Berlin for half a century, “Don Giovanni” was performed over 200 times.

In Poland, Mozart’s masterpiece was staged already in 1789 in Warsaw. 231 years after its premiere, the Warsaw Chamber Opera has an honour to present the second artistic vision of this work, appearing on our stage.

I really enjoy this show. It is something more than the latest theatre premiere.

In the projections by Rafał Olbiński, the emotions and subconsciousness of the title character are buzzing.

Tadeusz Kozłowski is a seasoned opera conductor, so every performance under his baton is a musical blockbuster, but for the first time in a long time, it was also possible to gather in the WCO such a well-matched group of soloists. Artur Janda outlined the title character in a clear, though perhaps too thick line, his interpretation lacked nuances, but also the director did not require much of him in this respect. Gabriela Gołaszewska was in the lead among the ladies – her soprano develops with each premiere. She sang the part of Donna Anna with a voice that was beautifully even in every register, for the first time she was so insightfully aware of the character’s experience. … Aleksander Kunach presented a good technique in the part of Don Ottavio, Sebastian Marszałowicz successfully gave a plebeian nature to the character of Masetto. Grzegorz Szostak’s bass doesn’t have the dark depth desired in the Commendatore’s part, but the singer added good acting, drawing – as the director wanted – the figure of a drunk and erotomaniac.

The opera “Don Giovanni” staged by Michał Znaniecki is, in my opinion, intended to be watched and listened to multiple times, in order to be able to taste it and fully enjoy it.

For Tadeusz Kozłowski, Don Giovanni in the Chamber Opera was his debut. For the first time, Maestro also conducted an ensemble of ancient instruments. The more applause is due to Kozłowski for his masterful way of extracting articulation and dynamic nuances from the orchestra, especially from the string quintet, which Mozart did not spare.

The set design lures and entices us to observe, deduct and guess through the openwork gaps. And here, I must admit that I found myself staring many times. Often times, the amount of stimuli I was taking gave me a big “wow”. The small space of the Chamber Opera became a kind of “silva rerum” in Znaniecki’s production. It happened on the proscenium, on the stage, in the back of the stage, in the side proscenium stages. It was only after a while that I realized with regret that stopping at the six hundred and eighth detail knocks out my musical awareness.

The best soloists were brought from different parts of the country, including the conductor, so that the most important element – Mozart’s music – remains intact