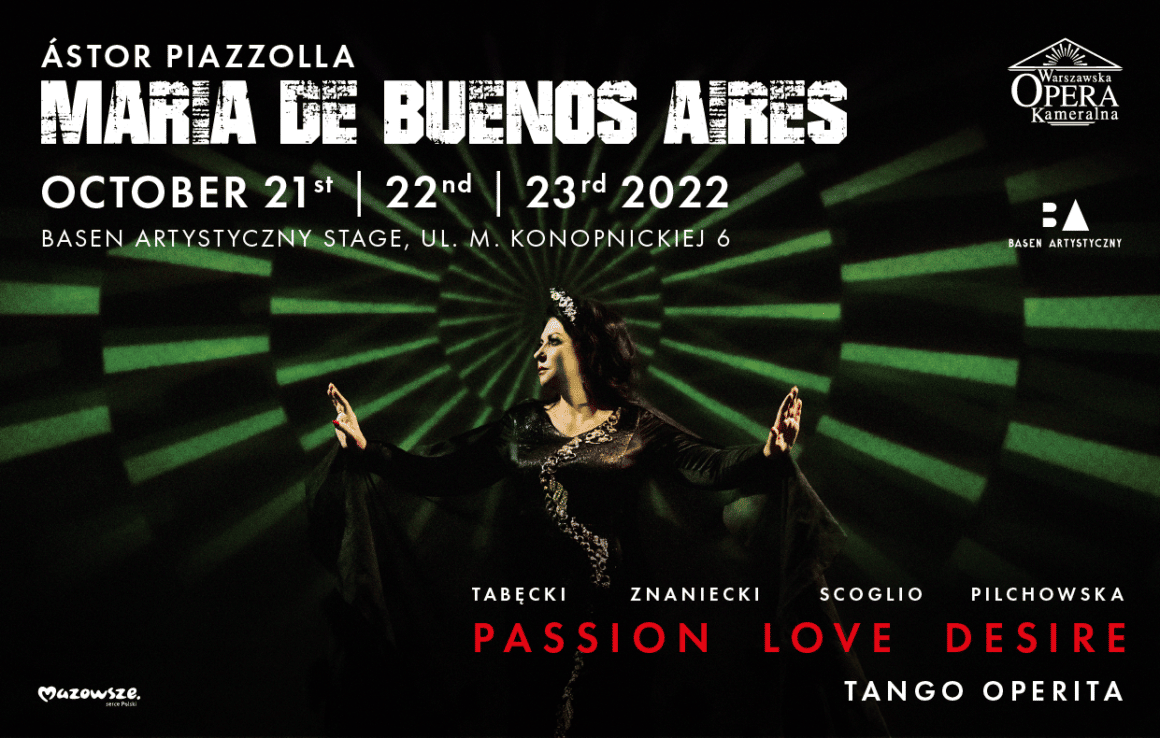 If you look for the most significant work in the achievements of Tango Nuevo’s father – Astor Piazzolla – in item that would unambiguously reinforce his indisputable position in the community of the greatest individualities of 20th century music, it is undoubtedly Maria de Buenos Aires. Ones call it an opera composed of tango and milonga, kept in the mainstream of Tango Nuevo, others – an operetta, written for human emotions, passions, weaknesses and love, based on the phrases of forbidden, dirty dance. Piazzolla himself said that the title Maria is a personification of Buenos Aires – a beautiful city, that also hides dark, unknown alleys.

Tango Nuevo is that kind of music that critics define in a rather colourful way. They make Piazzola a person who led tango – a forbidden dance, dirty, full of eroticism – from port brothels to philharmonic halls. Outstanding violinists and bandoneon masters faced this work. Gidon Kremer himself, whose recording of “\Maria de Buenos Aires is a model interpretation, said: “It is music full of virtuosity, emotions and depth, so typical of the works of another master, Nicolo Paganini. It radiates with romanticism and determination, feelings so strong that may push people over the edge”.

The Polish lyrics, sometimes randomly projected (well translated by three authors), were provided brilliantly, with its own melodic intonation, by Marek Kaliszuk (El Duende, Narrator). The Spanish original was great sung by Mikołaj Adamczak (Pieśniarz) with a full understanding of the value of this language, in which each word, if articulated emphatically, seems to mean more than it truly means, and often the sound itself gives a shudder. Miłosz Gałaj (Darmozjad) and Wojtek Soko Sokolnicki (Opryszek) proved equal singing skills. Together, in their private activity, they form the TreVoci band – here they operatically sang with appropriately dimmed voices, just like Gosha Kowalinska.

After the break, “María de Buenos Aires” returned to the Warsaw posters, a performance in which Alicja Węgorzewska created an unforgettable role, which is a proof of her charisma, perfect technique and perfectionism. Alicja Węgorzewska in this role shows Maria’s beauty, her love for life, but also pain and sadness.

The performance takes place not only on the stage, but also on quasi-balconies above the audience and between the tables at which the audience sits. I must admit, that I truly enjoy such solution. It gives the viewer a pleasant feeling of being in the middle of the events. It was also a necessity. On a tiny stage, not much could be shown, and the specific interior of the Artistic Pool just asks for unconventional performances.