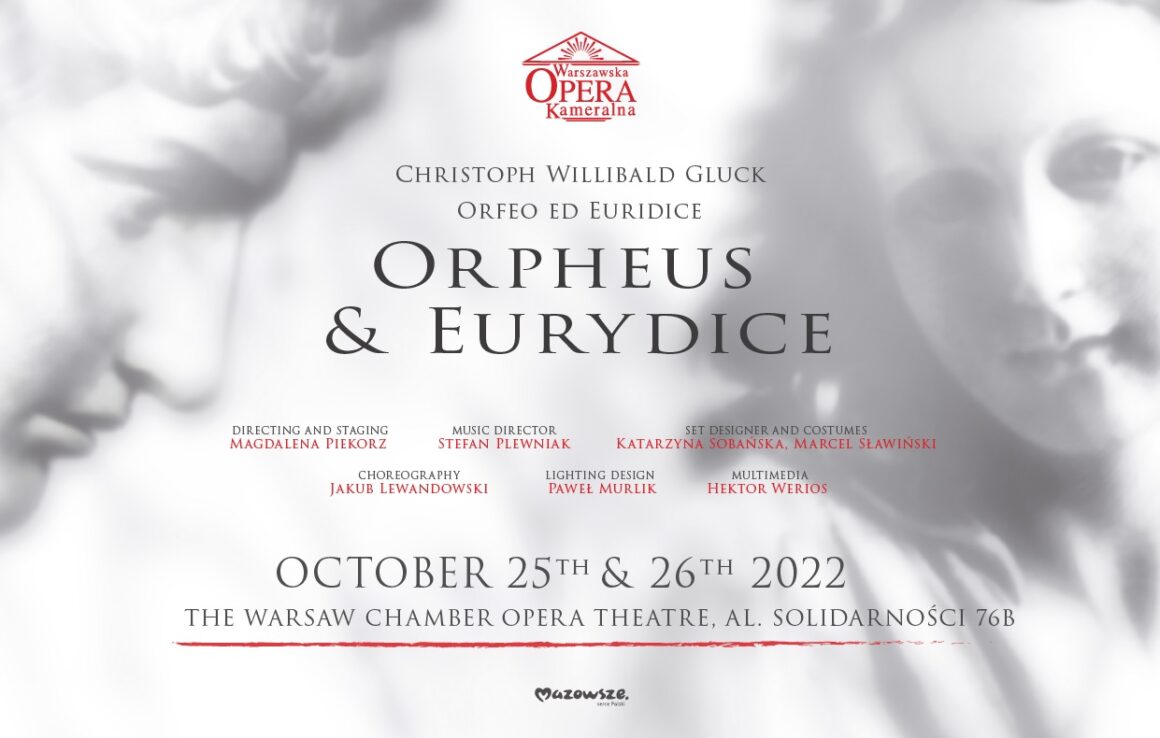 Director: Magdalena Piekorz
Winner of the Golden Lion at the 29th Polish Film Festival in Gdynia (2004, for the film “The Welts”, Polish candidate for an Academy Award for Best Foreign Language Feature)

„Orpheus and Eurydice”, since its premiere on the 5th of October 1762 at the Burgtheater in Vienna, has been successfully staged at the world opera houses winning the hearts of music lovers. We can surely speak of a strict canon of the genre.

Polish premiere of „Orpheus and Eurydice” took place fourteen years after the Vienna world premiere (1776) and two years after the Paris staging, which showed the world a new version of the work. The aforementioned novelty was deviation from engaging the castrato in the main part, and entrusting it to the tenor, in accordance with the past trends. The popularity and timeless beauty of the work is evidenced by the fact that it was adapted by Hector Berlioz himself, which led to the creation of a new Italian language version of this piece, that conquered Italy’s leading stages (including La Scala) and, led by Arturo Toscanini, delighted music lovers of the New York Metropolitan Opera. The work’s popularity among the masters of the conducting art is also a measure of its artistic power. Hence, it is worth mentioning that in order to lead “Orpheus and Eurydice”, such giants of conducting profession as Bruno Walter, Pierre Monteux and Wilhelm Furtwängler, stood behind the conductor’s stand. Whilst, the work itself, in the name of achieving stage realism, was later given another new version, in which the main male part was dedicated to the baritone. Paradoxically, the multitude of versions meant, that for some time, the original, completely Gluck’s French-language version was forgotten. Fritz Reiner himself returned to it in London’s Covent Garden (1937).

A photographer, who worked with WCO for many years, late Jarosław Budzyński, with this unique photo, won a distinction in the 5th Edition of the Theatre Photography Competition organized by the Zbigniew Raszewski Theatre Institute.

Behind the spectacle at the Warsaw Chamber Opera stands an outstanding person, director Magda Piekorz. A laureate of the Golden Lion at the 29th Polish Film Festival in Gdynia (2004, for the film “The Welts” – Polish candidate for an Academy Award for Best Foreign Language Feature). Her directing of “Orpheus and Eurydice” is her debut as an opera director. As she herself says: Christoph Willibald Gluck’s “Orpheus and Eurydice” is one of the most beautiful works of classical music that tells the story of love put to a great test. Orpheus, after Euridice’s death, gets a chance to descend into Underworld and bring his beloved wife back to the world of the living. The condition, however, is that he will not look at her until they are back on earth. Amore, the Jupiter’s messenger, is the one who puts Orpheus to this task. Orpheus resolves to take on the quest and descends to Hades, appeasing the Furies. Amore’s prophecy fulfils and Orpheus finds his loved one. Before them, there is only a way back that will prove far more challenging than one would ever suppose.

Our idea for presenting the Gluck’s work was to create a multi-dimensional dance and musical spectacle that will combine the classical and contemporary form of expression. In order to reflect the archetypal character of the work (perpetuated by the tradition of the myth) in the stage and costume design, we will refer to antiquity. Orpheus and Euridice will appear on the stage as statues that will have their counterparts among the dancers (alter ego). They will express their emotions, that were stock-still by the premature separation of the spouses. Along with the action, their characters will become more and more human and the climactic meeting of Orpheus and Eurydice will show that when it comes to the history of mankind in the matter of relations outside the context and historical time nothing has really changed.

Just before the Warsaw’s premiere, Stefan Plewniak said: “Orpheus and Eurydice” is one of my favourite myths, since it tells about love that overcomes death. Orpheus is a man who can tame hellish phantoms with divine singing. He is an incomparable artist and a heroic lover.

The myth itself raises the most existential questions for humanity about love, death, and what is most beautiful about it, that with genuine faith and love one can overcome the gates of death, and even more, return from the afterlife with a loved one.

The subtle content about immortality and our ideas about what happens to us after death make Gluck’s opera set on a very strong pedestal. Gluck focuses in a very innovative way on his characters Orpheus, Eurydice and Amore, constructing the opera’s course in such a way that they have time for spiritual transformation, dilemmas, internal struggle, falls, and finally victory.

My favourite fragments of this opera are the moving mourning choirs in the first act; taming of Hell’s Fury, which opens Orpheus’ passage through the gates of Hell at the beginning of the second act. Orpheus’ arcadian aria, who’s delighted with the beauty of Elysium, where Eurydice is staying. A masterful scene of Eurydice being led by Orpheus along the hellish path; their conversation, and true, real-life questions, doubts and Eurydice’s curiosity, and at the same time, in Orpheus we can see the male firmness and determination to keep the oath, which leads to a marital fight in the third act and to the final course of events, which is confusing at times, but ends with a triumph.

The opera has a beautiful drama, a fast-paced action and many touching, suspenseful moments. I look forward to getting this work done and working with such a great team of producers.

The set design as well as costumes were made by Katarzyna Sobańska and Marcel Sławiński, who are known, for example, from their work on Pawlikowski’s film “Cold War”. Hektor Werios is responsible for multimedia, and Paweł Murlik for the lightings. Hats off to the dancers, led by the phenomenal Jakub Lewandowski, who created the choreography – beautiful, emotional, extremely clear, even ravishing. Thanks to this, the show is not only an opera but also a dance performance.

Stefan Plewniak led the Musicae Antiquae Collegium Varsoviense orchestra with remarkable energy, he balanced the proportions between wind instruments and ear-catching sounding of strings… The set design by Katarzyna Sobańska and Marcel Sławiński is memorable since owing to their idea the characters of this story are a reviving white marble, which is quite pervasive on stage.
Jacek Marczyński, Rzeczpospolita

The visual side of the performance is complemented by lighting design and multimedia. Paweł Murlik (lightings) and Hektor Werios (multimedia) are recognized specialists in their fields. An experienced director and her team looked at Gluck’s opera through the eye of a filmmaker. They created many memorable images. The musical side is not inferior to the visual one. We can hear the Ancient Instruments Ensemble of Warsaw Chamber Opera Musicae Antiquae Collegium Varsoviense (MACV). This time, Stefan Plewniak – a violinist specializing in baroque music and a musician with temperament – stood behind the conductor’s stand. Magdalena Piekorz characterizes him as a “dynamite”. In some scenes, he led the choristers to balconies under the ceiling, which are used by the technical team on a daily basis. (I don’t remember the performance in which they were used in the staging). The acoustic effect in the tiny space of the Warsaw Chamber Opera gives the viewer the impression of being in the middle of the events.
Alina Ert-Eberdt – Segregatory

aesthetically refined and beautiful … Maria Domżał as Eurydice was the second star of this premiere. Also dressed as a statue, but remarkably lively in reactions, she sang with an extremely beautiful soprano, dense sounding and rather mature in timbre than girlish, although there was no lack of delicate tones in her phrases. This liveliness of voice and eyes blended perfectly with the life that Plewniak gave to the sounds of MACV ancient instruments. In a long and dramatic scene, Maria Domżał, without losing any of the style requirements in her singing, experienced these different states with great naturalness, like a contemporary girl: at first angry that her beloved man was going somewhere and refused to look at her, and later surprised that she had to die again.

The Warsaw Chamber Opera has created a multidimensional dance and music performance that combines classical and contemporary forms of expression. Orpheus and Eurydice will appear on the stage as statues that will have their counterparts among the dancers (alter ego).

Artur Janda fulfilled his task brilliantly, and he was accompanied by an orchestra of historical instruments. The mood of the antiquity was emphasized by the artists’ interesting costumes and make-up.
Bronisław Tumiłowicz,  Przegląd