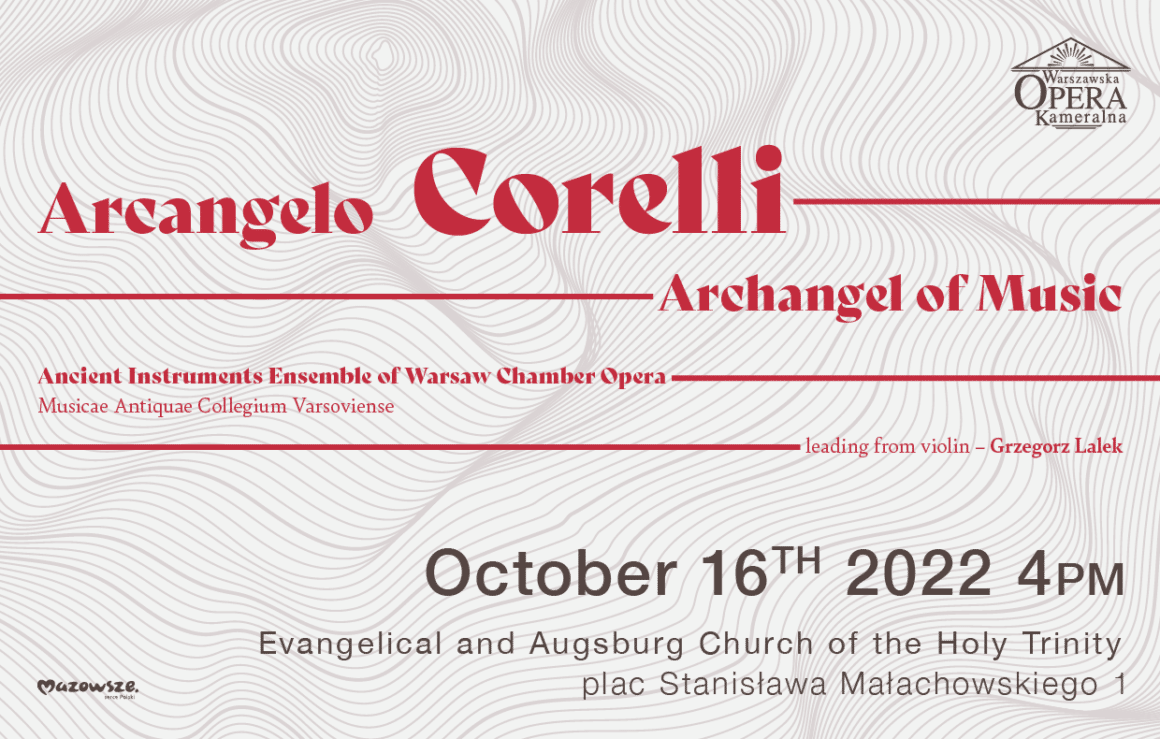 Evangelical and Augsburg Church of the Holy Trinity

The history of music is marked by the names of composers and virtuosos, who are milestones in the development of this art. Arcangelo Corelli is undoubtedly the man who made a difficult to overestimate influence on the music of the Baroque period. His contribution to the evolution and making a proper place of the sonata as a form and concerto is fundamental. It was not insignificant that the Italian, born in 1653, was also an outstanding violinist.

Although his legacy and the role he played are very important, paradoxically, we know little about his life itself, or (at least these are not so much confirmed facts as to be taken for granted). The origin of the composer itself is not clear. Some claim that he was a burgher, others that he had noble roots. This is what Cesare Felice Laurenti says in his “Historia Fusignano” (18th century), claiming that he was born into a noble family. At the other extreme, there are studies by Carlo Piancastelli (1914) and Marc Pincherle (1933) who dispel many myths related to him, starting with his origin and ending with the contacts with the papal court. Even the date of his father’s death is questioned (officially it is recognized that he died before the birth of his son), moreover, family trees are supposed to confirm the origin of the Corelli family directly from… the biblical Noah. It is said that as a young child he was so moved by a local priest’s violin play that he begged for lessons that were eventually given to him by another priest in the neighbouring town of San Savino.

It turned out that the talent of the young violinist surpassed the teacher’s knowledge. Word quickly spread of a very gifted young man. One version says that during his studies in Faenza, Cardinal Ottoboni noticed the young genius, recommending him to the attention of the Pope himself, who summoned him to Rome. How much of the truth is in there? Let’s add, that according to this account, Corelli’s father is still alive! The violinist moved from Faenza to Bologna, where, according to one of the versions, at the age of seventeen he became a member of the local Philharmonic Accademia (1670). While it is difficult to find confirmed facts here, it is known that the by-name of the composer Arcangelo Il Bolognese comes from this time. The first opuses of his works also come from this period. Apparently, after the Bologna season, the time of the Master’s European journeys began, he was supposed to visit Germany, Spain and France. In the latter town, he allegedly aroused the jealousy of Jean-Baptista Lully, who forced the Italian to leave the Paris court. He was also supposed to visit the court of the Bavarian Elector Maximilian II Emmanuel, as well as be friends with the violinist Cristiano Farinelli.

The mid-seventeenth century was the time of his first successes in Rome, where as Arcangelo Bolognese he joined numerous orchestras, incl. in the Church of San Giovanni del Fiorentini, San Luigi del Francesca and at Carlo Mannelli himself. He became a favour of Cardinal Benedetto Pamphili, which meant that for three years (1676-1679) he gave concerts in San Marcello. The following years saw the full bloom of his talent and great popularity. Rome, Modena, Naples, local lords and music lovers, fell in love with the violinist. In 1706, Corelli was elected a member of the Pontificia Accademia degli Arcadi (Arcadian Academy in Rome). He was given the Arcadian name of Arcomelo Erimanteo. During this period, he developed his own style, so eagerly cultivated by his students, although, what seems significant, he himself did not like to play the violin in the upper registers, which was confirmed by Chisholm Hugh. Why? Here again guesses come to the fore, maybe he didn’t have the best instrument? This, however, runs counter to his legacy, which also included excellent instruments. Ultimately, it is recognized that he appreciated the melodious, deep sound, which determined the registers in which he composed. It was at this time that Corelli created his most memorable work, the series of Twelve Concerto Grosso  Op. 6 (1680, published in 1714), which directly inspired Georg Friedrich Händel.

Today. we are safe in saying that Corelli’s achievements are fundamental to everything that was later given to us by the aforementioned Händel, Johann Sebastian Bach and Antonio Vivaldi. Interestingly, the Master himself, despite his great popularity and accumulated wealth (left behind 120,000 marks, a collection of works of art and master instruments), did not show off his richness to his contemporaries. For us, his most important legacy is the Concerto grosso and the collection of trio and solo sonatas with basso continuo accompaniment. Italians consider him one of the most influential people in the history of Italy (the composer was ranked 241st, while the 40,000-record collection “The Famous Birthday” ranks Corelli at 23,344).