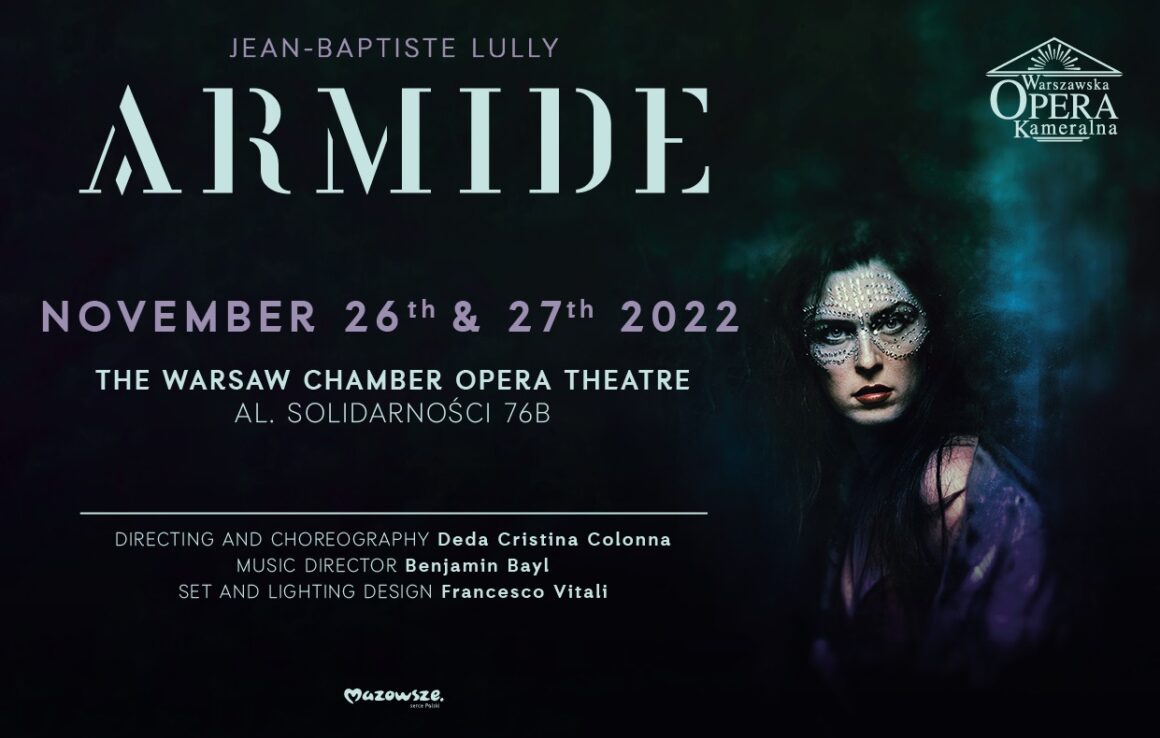 A musical tragedy in five acts in the original French language version.

Numerous awards and a television production that attracted a record number of viewers in front of the screens prove that we are dealing with an extraordinary production. Jean-Baptiste Lully’s “Armide” was produced in cooperation with the Innsbruck Festival of Early Music, Potsdam Sanssouci Music Festival and Baroque Music Centre of Versailles. It turned out to be one of the most important events of the 2017/2018 artistic season on the opera map not only of Poland, but also of Europe. If to measure success by the number of laurels that have showered “Armide”, we can even talk about a phenomenon. The award that comes to the fore is Giuseppe Di Stefano Award, often called the “Opera Oscar”, presented to Alicja Węgorzewska-Whiskerd and the Warsaw Chamber Opera in Taormina, Sicily. Equally significant are the titles of “Dazzle of the Year 2017” awarded by theatre critics, given to Marcelina Beucher for her title role and Deda Cristina Colonna for the best choreography.
https://youtu.be/9vrfCBqLYGk The staging of the opera “Armide” at the Warsaw Chamber Opera was the Polish premiere. It took place on 5 November 2017, exactly 332 years after the original staging at the court of Louis XIV. The uniqueness of this staging is highlighted by the fact that it was kept in the spirit and style of the original presentation, as noted by Piotr Krzyżanowski (austriaart.pl): The staging of this masterpiece of the French Baroque is identical to the one from the 17th century. It is a rarity today. Contemporary opera directors try, sometimes by force, to modernize old dramatic musical works. Sometimes they do it, and other times they don’t. We rarely deal with a real reconstruction, and not with the deconstruction of a work that is so fashionable today. This time, the Warsaw Chamber Opera focused on interpretive genuineness, both musical and stage one. And all thanks to the world-renowned choreographer and baroque music expert Deda Cristina Colonna. It was she, together with the set designer and costume designer Francesco Vitali, who took us into the court world of Louis XIV.

The show was recorded and broadcast by TVP Kultura. It was watched by a record number of viewers, never before so numerous in the case of broadcasting opera performances. In a similar enthusiastic tone, there were all the post-premiere reviews in which Michael Moran’s scientific analysis and publication in the prestigious “Opera Magazine” deserves a special mention. In all the post-premiere echoes, the commonly noted fact is that the performance was staged with the accompaniment of the Ancient Instruments Ensemble of Warsaw Chamber Opera Musicae Antiquae Collegium Varsoviense, which made music lovers hear Lully’s phrases just as the composer and his contemporaries heard them. The fact that the Warsaw chamber musicians are the only opera company with a full-time set of period instruments it places WCO in the top world elite of performance in the spirit of the Baroque era. The story of Armide and Renaud represents a sentimental journey, life crises in which these two epic characters experience internal contradictions. By experiencing what can be commonly understood as a life mistake, they learn something about themselves, discover previously unknown feelings and come to terms with their ideals. The experience of love is what ultimately gives them their human status.

As in the case of the baroque theatre, where the intention of its creators was to amaze and charm viewers through tricks and stage mechanisms, in our Armide the stage takes shape through magic, as well as through the use of multimedia effects. The magical world of Armide, along with all the accompanying characters, materializes in the theatre of the Warsaw Chamber Opera and appears to our eyes as a growing crescendo. During the adaptation, which we carried out for the needs of the Warsaw Chamber Opera, with great pleasure, we thought about paying tribute to the city of Warsaw, using in the visualizations the details of the Palace on the Isle, expanded in some elements, such as the Armide Palace, around which this story takes place. In order to understand our stylistic choice, it is important to understand the subtle connection between what impressed spectators in the 17th century in the vision of a musical piece and what might be astonishing today. The meeting point is right among our contemporaries and is based on the decision to use classic mechanisms of baroque theatre with contemporary multimedia technology.

It is with great pleasure that, together with the musicians of the Warsaw Chamber Opera, “Armide”, we created a fantastic and rarely performed work by Lully. I think that for everyone involved in its preparation, the very specific and unique style of French Baroque was a revealing and enlightening journey. I am very pleased with the effect achieved by our entire team. What strikes me about this extraordinary music is how old it is! In 1686, Bach and Händel were just one year old, Rameau three years old and Telemann five years old, but later they all followed in the footsteps of the great master Lully, Louis XIV’s favourite composer, the Sun King. It is a rare pleasure to listen to this music performed outside France, at such a high level and in such a unique place as the theatre of the Warsaw Chamber Opera.