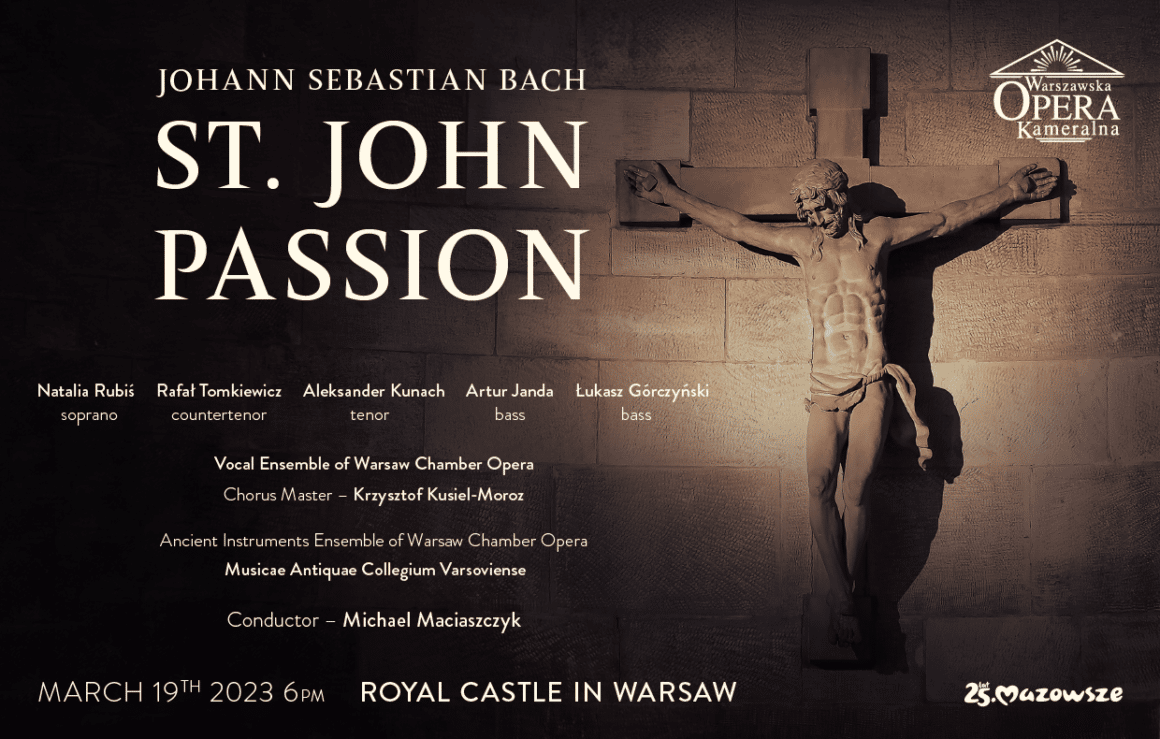 St. John Passion was created earlier than the famous St. Matthew Passion (1729), polished for many years by the Leipzig Cantor himself. Composed and performed on Good Friday in 1724 in the Leipzig church of St. Nicholas, the next instalment with numerous changes took place in another Leipzig church of St Thomas. The work is most often heard today as a mix of an unfinished new version from the end of 1730 and the fourth version from 1749 with no subsequent textual changes to the arias. However, it did not put an end to the works on the Passion. Another version of it, performed during the composer’s lifetime, is dated 1749. It basically corresponds again to the structure of 1724’s version, but is significantly expanded in the instrumental area and contains a longer section of 33. It is believed that two fragments taken from the Gospel of St. Matthew and inserted into the original version of the John Passion (Mt 26:75: Peter remembered the words of Jesus, who said to him: “Before the rooster crows, you will deny me three times.” And he went out and wept bitterly.; Mt 27, 51-52; At that moment the curtain of the temple was torn in two from top to bottom. The earth shook, the rocks split and the tombs broke open. The bodies of many holy people who had died were raised to life) were removed by order of the authorities (the score had contain only original music, composed with Gospel of St. John in mind), replaced by a tenor aria and a sinfonia. The latter have been lost.

It is said, that the Passion describing Jesus’ path from his capture to death on the cross is a prayer of Bach himself, his profound profession of faith. From the initial choir Herr, unser Herrscher, dessen Ruhm in allen Landen herrlich ist! (Lord, our ruler, whose glory is magnificent everywhere!), to the final choir Ah Herr, lass dein lieb Engelein (Ah Lord, let your dear angels), Bach builds a tension with every phrase and note – this wondrous mystery that is based on the dogma, the essence of the Christian faith. At St. John’s, the description is basically limited to the “fictional” presentation of the trial scenes in front of the chief priests and Pilate. And it was precisely this multitude of pathos, the atmosphere of constant dramatic agitation, that must have disturbed Bach, since for balance he intertwined the aforementioned few fragments from the Gospel of St. Matthew. Today, you can hear how much St. John’s description limited Bach, making it impossible to incorporate the arias and chorales necessary for oratorio passion. Bach found this formal freedom in the Gospel of St. Matthew.

Father Julian Mieczysław Śmierciak from the Institute of Musicology of the Catholic University of Lublin noticed this: Bach created spontaneously, with the power of his genius and he didn’t strictly follow the musical patterns, neither copied nor did he calculated it according to mathematical proportions, but he knew perfectly well the rules of musical rhetoric, and he used them masterfully, to express such significant events that the Passion of Christ brings with it as accurately as possible, with as much power and as impressively as possible and with the best means.

The music of Johann Sebastian Bach with every note seems to confirm the validity of the words of Martin Luther, who said: The Passion of Christ cannot be played out with words and pretending, but with real life itself. Hence, Bach’s Passion works achieve a balance, unheard of in others, between the seriousness and weight of the description of Lord’s Passion with the perfection of the phrasing, even the fleetingness of the aria. Nomen omen, Bach, while creating his passion, referred to the translation of the Gospel according to Saint John in Martin Luther’s version.

Scholars say directly that with this work Bach himself prays to God, and the weight of the notes seems to ask for redemption. For the faults of all of us.

The Warsaw Chamber Opera has turned Bach’s oratorio music into a kind of showcase, and due to building the interpretations on the foundation of one of the best ensembles of our time amongst the group specializing in in performing on period instruments or their copies – Musicae Antiquae Collegium Varsoviense, it provides music lovers with sensations flowing on the wave of interpretation historically informed.