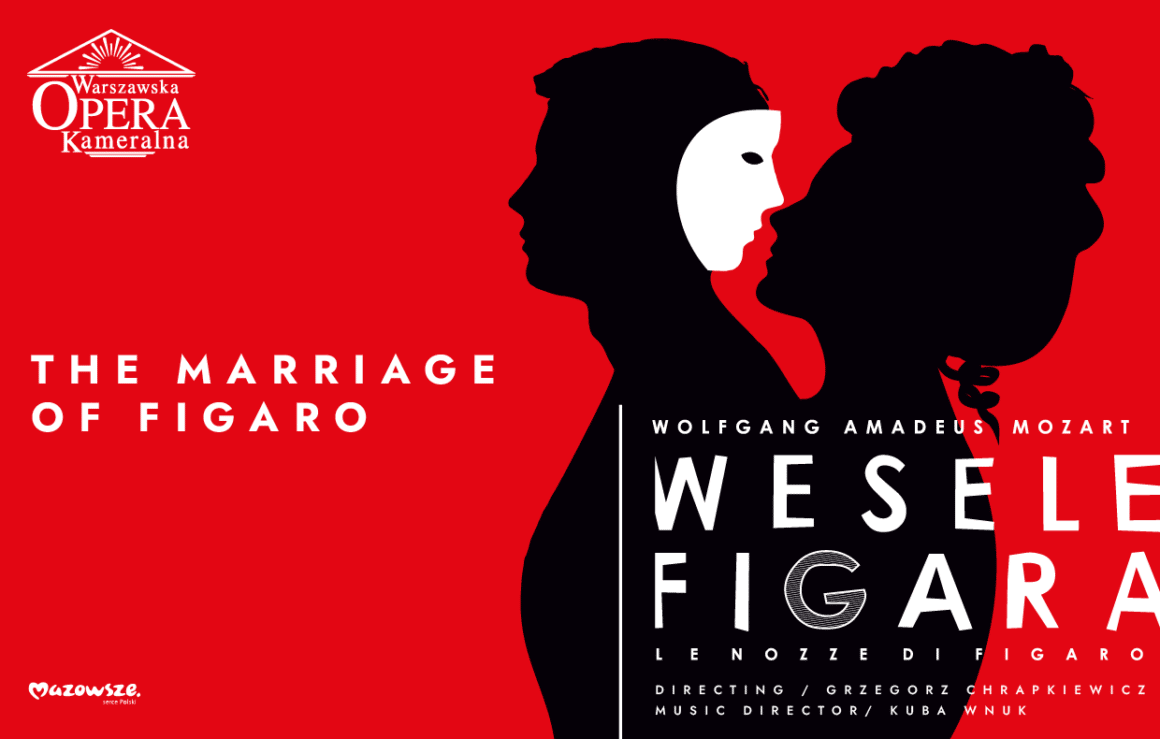 THE MARRIAGE OF FIGARO

Comic opera in four acts in the Italian language version

The Marriage of Figaro is one of the most brilliant operas in the history of the world. The opera was created in 1786 to a libretto by Lorenzo da Ponte, based on the famous play by Pierre Beaumarchais of the same title. Art that criticized the social relations of the feudal world was forbidden in many countries. Mozart, taking up this subject, also risked a lot, although da Ponte made sure that all social or political issues present in the original play were omitted. With the consent of the Emperor, the premiere took place in the court theatre on 1st May 1786. The work was well received, although further formal restrictions were imposed on it.

In this piece, Mozart climbed to the very top of absolute creativity. The social meaning of the Beaumarchais’ comedy received a dimension of social psychology through Mozart’s music. Each character of Mozart’s opera speaks its own musical language, tells its own story. Mozart does this through 18th-century opera conventions, and at the same time gives individual characters individual musical traits. Thus, the characteristics of the bold Figaro, the brutal Count, the resolute Susanna or the tormented Countess are different. Arias, duets, ensembles, great collective scenes, the finals of the acts lasting many minutes, become not only a musical image of the stage action, but through the individualism of the characters, they present a real life to the viewer’s eyes.

Grzegorz Chrapkiewicz’s staging gave this genius opera a purely human dimension. The director plays with the characters and at the same time reveals human weaknesses, including emptiness and lust. He soothes the sharp features of the characters with humour and metaphor, enlivening the action with gesture and pantomime. The veiled eroticism of the work and the psychological outlining of individual human types give this realization the features of outstanding, albeit funny art. Mozart’s music gives the whole a flow and boosts the action of the work. The new version of The Marriage of Figaro at the Warsaw Chamber Opera will not leave the viewer indifferent, but will engage the audience emotionally, drawing them into its specific, not entirely merry world.

From the orchestra pit, the energy, or even the euphoria of the instrumentalists of the Musicae Antiquae Collegium Varsoviense ensemble, playing under the baton of Piotr Sułkowski, poured out directly. The euphoria flowing from this brilliant score spread to the soloists and the audience, and was intensified by the farce style of the performance. Mozart in a farce? Hmm … Lorenzo da Ponte’s libretto gives such possibilities, but Mozart perfectly matched the music to it, as in a puzzle. But the soloists dispelled this doubt. Both those long-established in their roles and debutants, with ease and speed, made funny faces and gestures in line with the singing, and fell into comedic situations as naturally as if they had never dealt with anything else on stage or in life.

A slim figure of Artur Janda with an Iroquois on his head, a smile, cleverness and a light bass-baritone made up the ideal of the operatic Figaro, striving to marry Susanna. In this role, the agile, pretty and intelligent Aleksandra Orłowska, fresh in the WCO ensemble, radiated with the charm of glances and her voice. Tomasz Kumięga played the elegant Count as a raptor and shrew, Karina Skrzeszewska – Countess (a recognized soloist of the Silesian Opera) sparkled with the gorgeousness and beauty of the soprano, and both of them were superbly led in the acting matter. While courting other women: Countess, Susanna and Barbarina (Paulina Tuzińska), the unique alto of Jan Jakub Monowid, i.e. Cherubino in a baseball cap, who was riding on the stage on a scooter, was bursting with excitement. Elżbieta Wróblewska was eye-catching – and ear-catching! – as charming Marcelina in a hat with a feather and a tight dress. The intriguer Basilio – Aleksander Kunach – with the hair of his gray wig flying around, was moving everywhere with a light case of the violin. Beaumarchais subtitled his comedy The Marriage of Figaro, the libretto’s basis, a Crazy Day and the director Grzegorz Chrapkiewicz, mainly an actor, apparently followed this path. The lyrical break in the farce madness was only a harpsichord, sometimes put out from behind the scenes, with a concertante and darkly dressed Mrs. Konstanze Mozart (Dorota Stawarska). The costumes designed by Katarzyna Szczurowska and Anna Skupień were interesting, with its expressive form and colour, they stood out from the background of the white walls, and apart from references to contemporary fashion, they had a lot of fantasy.

Situations on the stage change quickly. Gags are funny. The props include a scooter, which is now pervasive in the streets of Warsaw. The director, taking advantage of the very close distance between the stage and the audience in this theatre, “ordered” the singers to play with facial expressions. The play with looks and grimaces of the face is important in this staging because the recitatives are performed in Polish in a humorous, sometimes coarse translation by Stanisław Barańczak. Polish subtitles during arias sung in Italian also “fly” in a translation according to Barańczak. The Orthodox were grimacing at this procedure, but it did not offend me. I do not mind breaking the convention as long as it is done up to the mark. And that’s what happened in this case.

The highlight of the performance are countertenors in the part of Cherubino. This part is sung alternately by Jan Jakub Monowid and Michał Sławecki. Although the opera is a convention, the women in the role of Cherubino, even if they sing well, appear grotesque in the scenes of male-female slips.

I like the involvement of a harpsichordist, who was given several acting assignments. Unlike singers and dancers who wear contemporary costumes, she wears a Mozart-era gown and wig. She is listed in the cast as “Konstanze, Mozart’s wife”.

The new production of the Warsaw Chamber Opera is a performance in which, despite a few less successful ideas, the director captures well the psychological nature of the characters, and the comedy of the love plot is exaggerated. The ascetic whiteness of the set design contrasts here with bold, fanciful, colourful costumes, among which we can find both contemporary style and one referring to the Mozart era.

The cast was a strong point of the premiere performance. Artur Janda feels very comfortable in the role of Figaro, which he has repeatedly performed, and it was a very successful premiere for him. Aleksandra Orłowska, debuting as Susanna, also showed very well acting skills – her beauty, awareness of gesture and words matched her excellent vocal condition. Tomasz Kumięga appeared as Count, a competitor with Figaro for the graces of Susanna, who can be seen more often on the stages of foreign opera houses than in Poland. The singer skilfully found himself in the convention and he is definitely an artist whose development and subsequent creations are worth observing. For the first time, the part of Countess was also sung on Saturday evening by Karina Skrzeszewska, who has a solid, strong and very beautiful voice. The show’s pride was Jan Jakub Monowid as Cherubino full of youthful energy, courting all the heroines of the comedy at once. All the soloists deserve praise, but among the supporting characters, who definitely attracted attention were Elżbieta Wróblewska (Marcelina) and the young soprano Paulina Tuzińska (Barbarina), whose name is worth remembering.