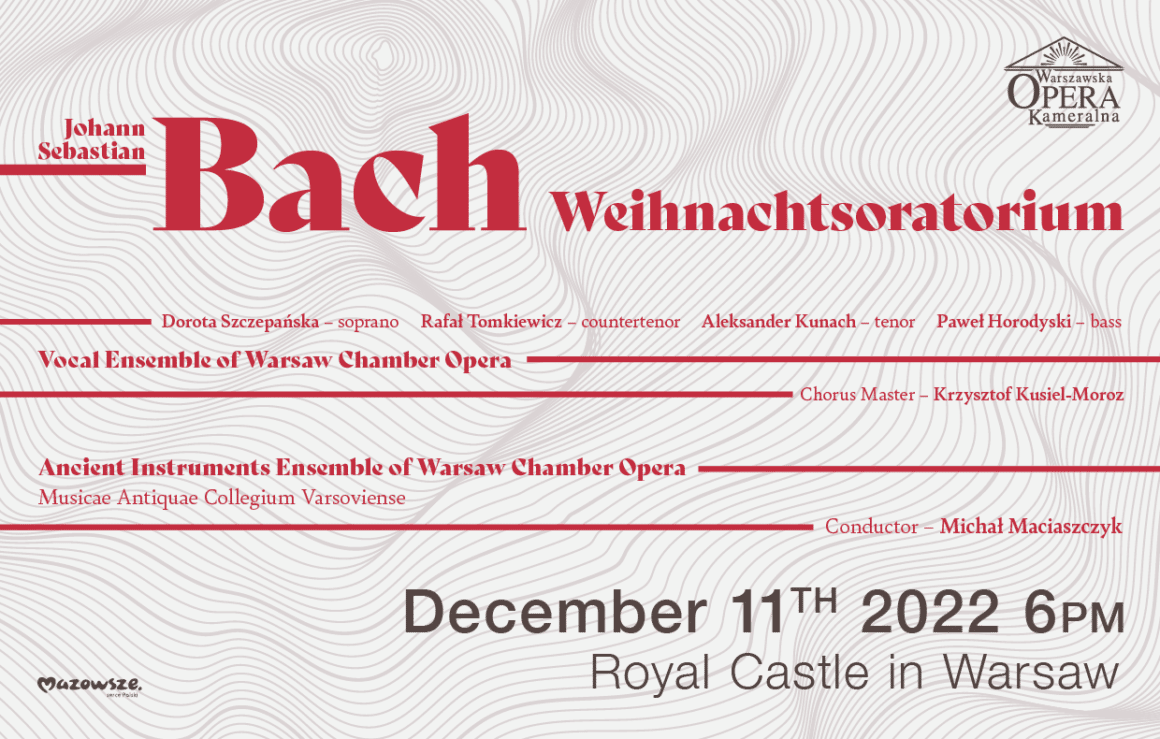 The crown jewel of the Bach canon

” The aim and final end of all music should be none other than the glory of God and the refreshment of the soul”
J.S. Bach

What the works of Caravaggio and Michelangelo means for painting, the legacy of Leonardo da Vinci is for art and technology, the oratorio magnum opus of Johann Sebastian Bach means for music. Apart from the Passion music and the Mass in B minor, “The Christmas Oratorio” – “Weihnachtsoratorium” with the Easter Oratorio and the Magnificat in D major, are the most perfect fruit of baroque music, the most outstanding heyday of music culture in general. Without any division into styles, genres and epochs. The world heard Weihachtsoratorium for the first time in 1734, on the day of the Lord’s birth. Since then, his triumphal procession through stages and concerts in temples around the world has continued. The six-part, nearly three-hour long work describes the Birth of Jesus, in the second part – the annunciation to the shepherds, the third part is devoted to the adoration of the shepherds, the fourth – circumcision and naming of Jesus, the fifth part describes the journey of the wise Magi from the East, and the sixth part is about the adoration of the Magi.

Today we will present III Cantatas, which were intended for three consecutive Christmas holidays (25, 26, 27 December).

In the first cantata, trumpets sound joyfully with the accompaniment of timpani; apart from them, Bach also included flutes and oboes, thus creating one of the most magnificent ensembles of the Baroque orchestra. In this work, heralding the Birth of the Saviour, is dominated by a mood of spontaneous elation and triumph, although there is also an intriguing melody of the chant „Herzlich tut mich verlangen”, also known as the passion song “O, Haupt, voll Blut und Wunden” – it was interpreted as a deep symbol reminding that the joy of the Jesus’ Birth is the beginning of the path that leads to the Cross and Redemption.

The second cantata brings calmness – the new born Baby sleeps “where the ox had a meal before”, and the Mother sings him a touching lullaby („Schlafe, mein Liebster:). The angels proclaim God’s glory and announce the joyful news to the shepherds, inviting them to go to Bethlehem to worship the Saviour. This cantata is being opened exceptionally not by the choir, but by the endearing Sinfonia in the swaying rhythm of Bach’s favourite dance – Siciliana. The characteristic sound of strings and flutes is, according to Albert Schweitzer, a symbol of the angelic hosts. They correspond to the voice of the tenor oboes da caccia, imitating the sound of shepherd’s bagpipes and shawms. The chorale closing this part is supposed to be an identification of the shepherds going to the stable with all the faithful, “hosts of the Lord” joyfully singing to him.

The third part of the Oratorio is a musical scene of the adoration of the Child by the shepherds who found him by following the instructions of the angels. They are now begging the Lord to hear their humble prayer songs. The impressive, “royal” cast from the first part returns – a symbol of joy and majesty that God did not lose, despite the fact that he was born in a poor stable. So the trumpets and the timpani resound again, and the chorales express the unwavering faith and joy of the community – “after all, all this He has done for us to show His great love; for this reason let all the Christian world rejoice and thank Him for this in eternity!”.